RD Vincent is an American author born in the historic village of Goshen, New York, on February 14, 1979. He was raised on a small dairy farm along with his brother and sister and attended Pine Bush Central Schools.

In late 1997, he attended SUNY Potsdam and began his studies as a Music Major. Feeling a bit overwhelmed in the music world, he sought refuge in both the English and Business Econ Departments. By the fall of 1998, he had a rare opportunity to meet New York author and poet Maurice Kenny. Over the next year, Vincent studied with Kenny in his creative writing class. Later that year, inspired by Kenny, he began writing for The Racquette, SUNY Potsdam College's Newspaper with a small cooking column called "Something to Cook About." The columns were published once every two weeks and contained a short story which always had the characters cooking or baking. Vincent included the recipes. It was at this moment that the idea for Donbridge came about while collaborating with his Grandmother and Great Aunt who both had a multitude of stories passed along to them from their elders. This project would take Vincent nearly 15 years to storyboard. RD Vincent's first publication, Donbridge, The Ring of Lazarus, was published July 15th 2015 on Amazon eBooks. To date RD Vincent has been featured on TV, Radio, Newspapers and Webinars.  Since his first publication he has published 8 books and currently has a cooking column revised from his college days called with the same name "Something to Cook About".  Recently, RD Vincent began a new project with Film Producer Alberto Facoon of Cornwall, New York whereby a TV Series is in the works surrounding the fables of the entire series. 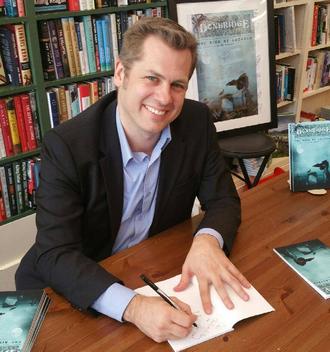